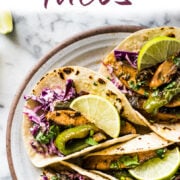 Mushroom tacos are one of my favorite meatless dinner recipes to make during the week. Thanks to the portobella mushrooms, they’re filling and have a rich, “meaty” taste that will satisfy the biggest of meat lovers.

They’re also easy to make and take only 25 minutes to throw together from start to finish! That’s a total weeknight dinner win in my book.

And did I mention they’re TACOS? Everyone loves tacos! You just can’t go wrong, my friend.

For this recipe, you’ll need:

How to make mushroom tacos

First, remove the gills from the portabello mushrooms. (see photo above) To do this, hold the mushroom in one hand and stick the tip of a spoon into the gills with the other hand and pry them up and away from the base.

You should then be able to slide the side of the spoon all the way down and remove the gills in larger sections.

Do the best you can here. The mushroom doesn’t have to be completely clean. Just remove what you’re able to.

If you’re grilling the mushrooms instead of sauteing them, you can leave the gills on.

Next, slice and toss the mushrooms with the marinade made from olive oil, lime juice, cilantro, garlic, chile powder, coarse kosher salt, ground cumin and dried oregano. (see photo above)

Add the mushrooms to a large nonstick skillet over medium-high heat and cook for 10 minutes.

If you’re grilling the mushrooms instead of sauteing them, don’t slice them into strips. Instead, leave the mushroom caps whole and toss them with the marinade. Grill over high heat for 4-5 minutes per side, or until beautiful grill marks appear and they’re caramelized.

Once the mushrooms are cooked, remove them from the skillet or the grill and set them aside.

In the same skillet, add a little olive oil and the sliced bell peppers. Saute them for 10 more minutes, until peppers have softened.

Add the mushrooms back in, toss together to combine, and remove from heat. Serve in warm corn tortillas with the slaw.

To add a bit of crunchy texture to the sauteed mushrooms and peppers, I highly recommend you pair it with this quick and easy red cabbage slaw.

To make, simply toss together sliced red cabbage, cilantro, and a bit of light mayo.

I would typically add lime juice to a slaw like this, but the mushrooms already provide a lot of acidity from the marinade, so I added some mayo instead to tone it down a bit.

For the bell peppers

To grill the portabella mushrooms instead of sauteing them, remove the stem of the mushrooms but leave the gills on. Toss the mushroom caps together with the marinade and grill over high heat for 4-5 minutes per side, until beautiful grill marks appear and the mushrooms begin to caramelize. Remove from grill and slice into strips. Don’t have portobello mushrooms? Use cremini mushrooms (also called ‘baby bella’) instead. The average portobella mushroom is between 3 to 5 ounces, so I recommend getting around 18 to 30 ounces of cremini mushrooms. To make this recipe vegan, use a vegan mayonnaise like Vegenaise. To make this a little spicy, add in 1 to 2 teaspoons of crushed red pepper flakes to the marinade. Nutritional information does not include corn or flour tortillas.
Nutrition Facts
Easy Mushroom Tacos
Amount Per Serving (1 /6th of recipe)
Calories 222 Calories from Fat 144
% Daily Value*
Fat 16g25%
Saturated Fat 2g10%
Trans Fat 0g
Polyunsaturated Fat 4g
Monounsaturated Fat 9g
Cholesterol 0mg0%
Sodium 596mg25%
Potassium 713mg20%
Carbohydrates 19g6%
Fiber 4g16%
Sugar 7g8%
Protein 4g8%
Vitamin A 1750IU35%
Vitamin C 201.3mg244%
Calcium 90mg9%
Iron 1.8mg10%
* Percent Daily Values are based on a 2000 calorie diet.
Did you make this recipe?Leave a comment below and tag @isabeleats on social media!
« Jalapeno Popper Dip
Chile de Arbol Salsa » 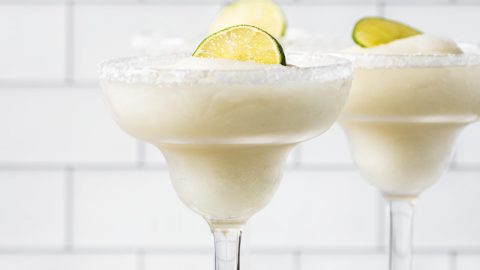 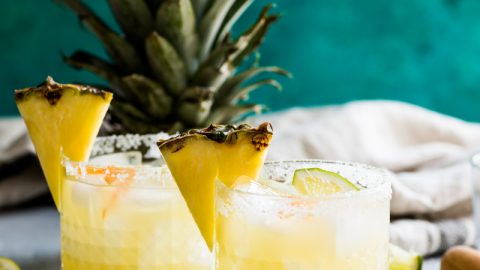 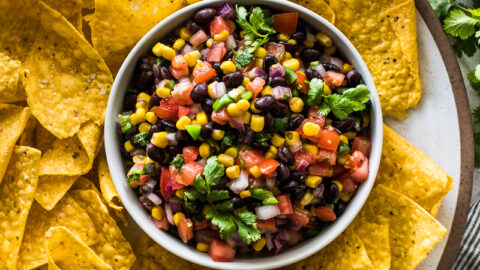 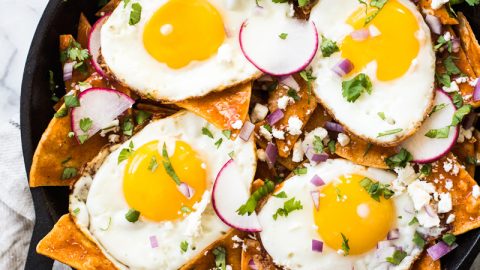 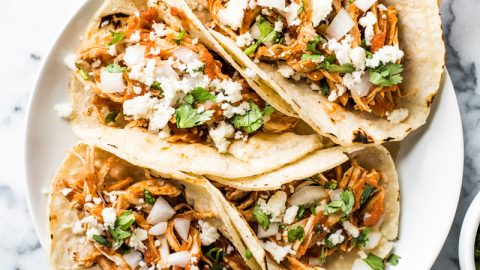