You are here: Home / Recipes / Mexican Bunuelos
Jump to Recipe 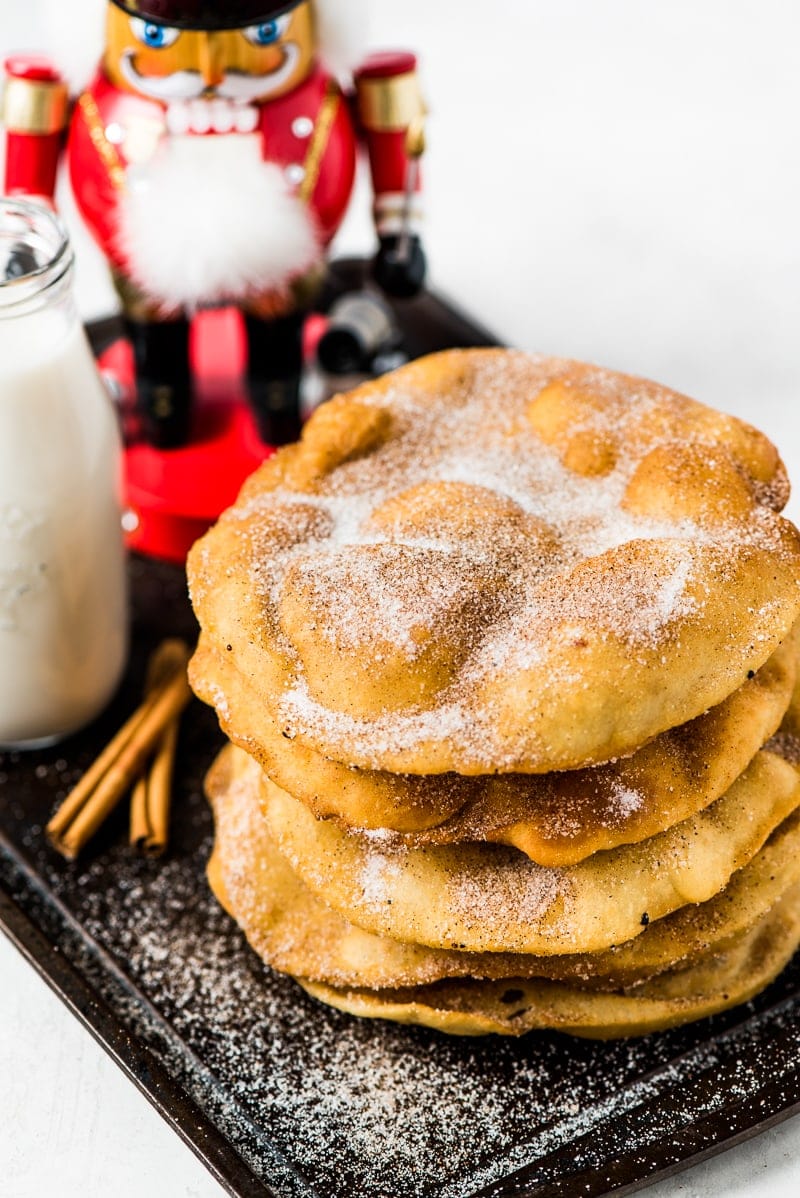 Bunuelos are one of my favorite treats that my family makes during the Christmas and New Years holiday. What’s not to love about fried dough covered in cinnamon sugar, am I right?

For the holidays, we always have a big stack of bunuelos, tamales, empanadas, and posole, as well as a pot full of Mexican Christmas Ponche or Mexican Hot Chocolate. We go all out for Christmas and New Years and it’s so so good!

As a little kid, I remember my mom standing at the stove top frying bunuelos and placing them on a large plate covered in paper towels to help catch any excess frying oil. She’d cover them with cinnamon sugar, move them to a serving platter and continue frying more. I would always sneak up behind her and grab a freshly fried bunuelo to snack on while she finished making them.

Okay, okay. Who am I kidding. I still do that! I’ve never been good at waiting until they’re all fried to have a taste. I can’t help it!

Bunuelos are a dessert made from fried dough covered in cinnamon sugar. They’re usually flattened into disks and served around Christmas and New Years in many Mexican households.

My family always made them exactly as shown in this recipe, but there are tons of variations throughout Mexico and Latin America. 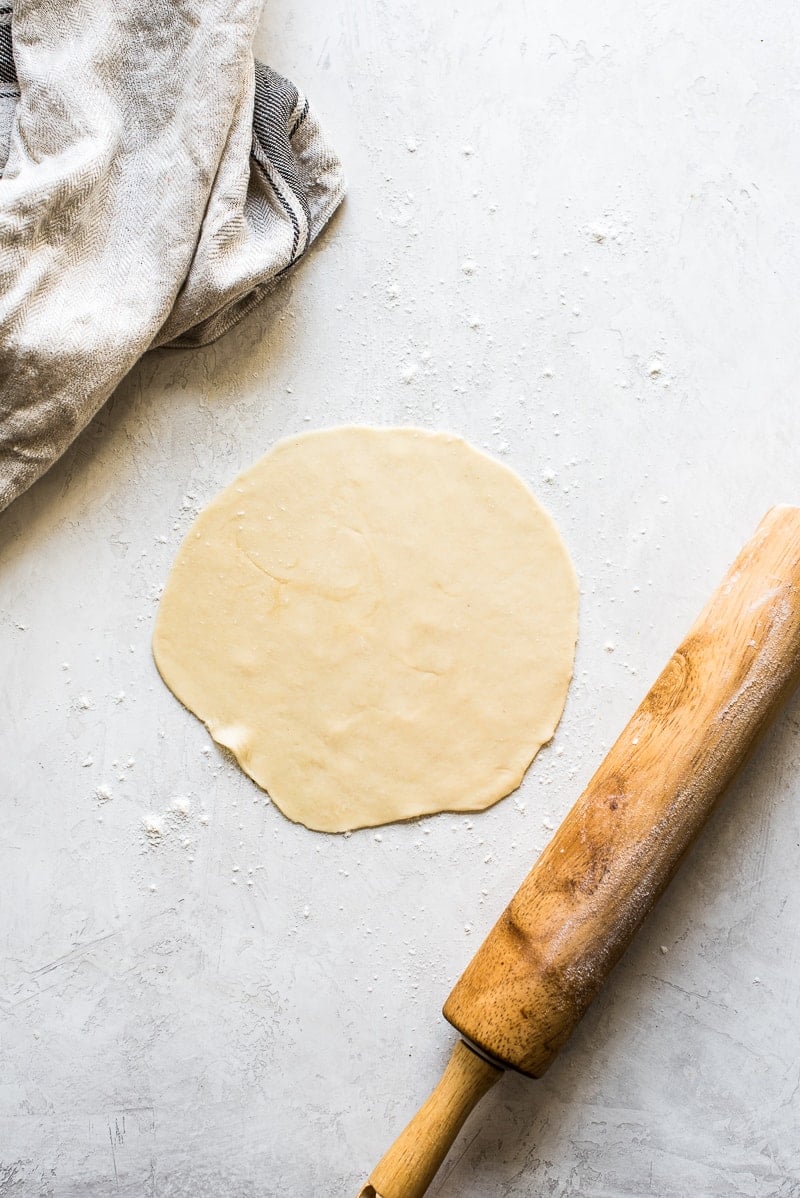 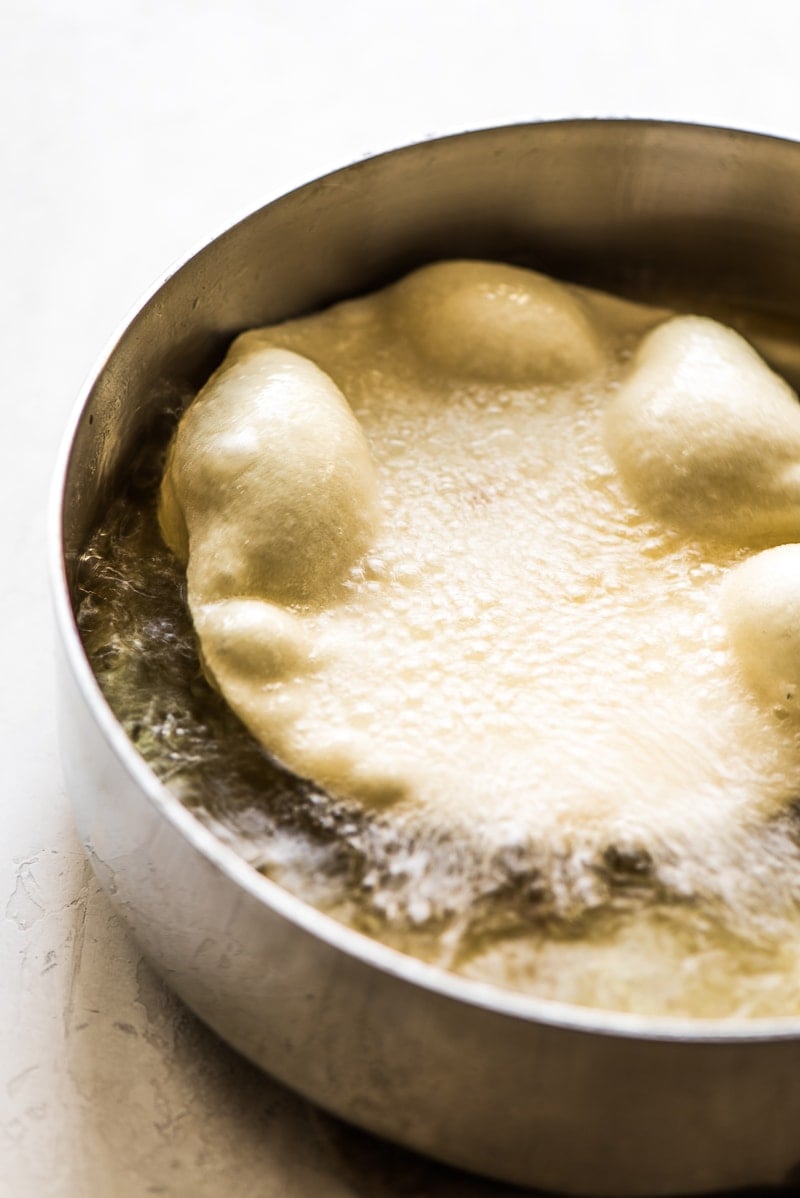 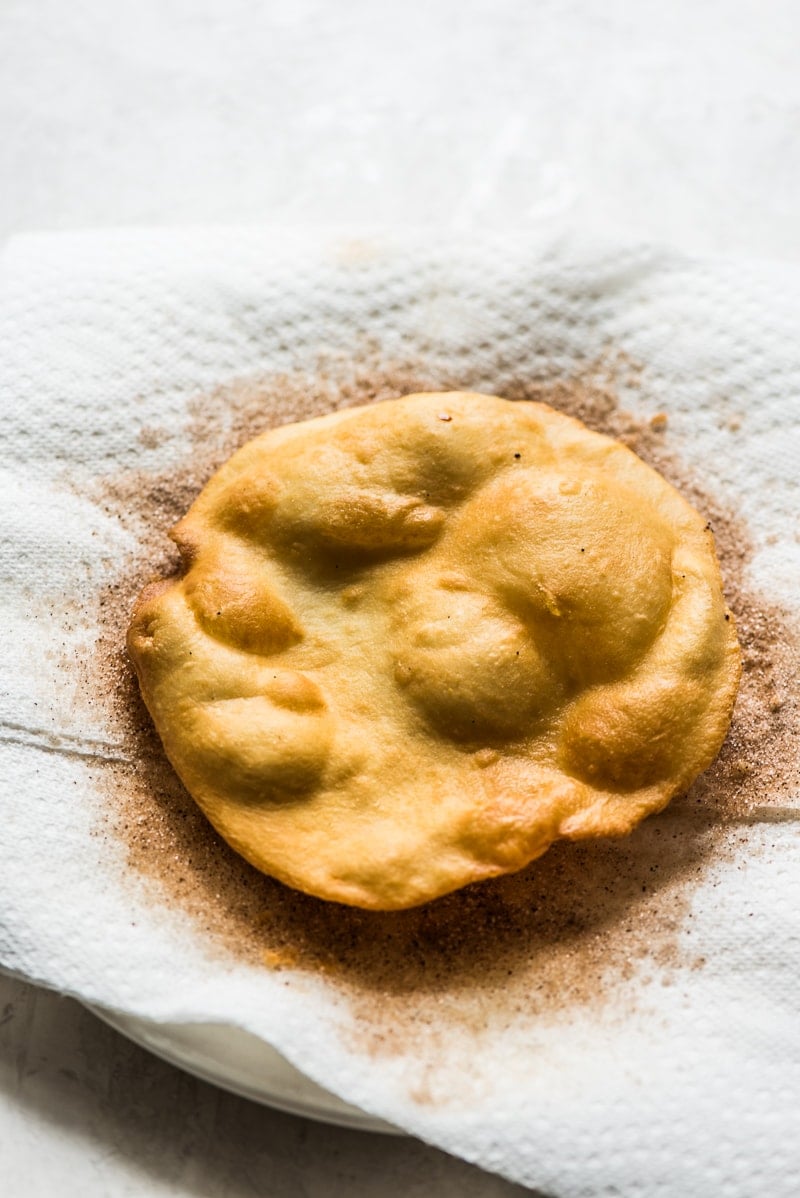 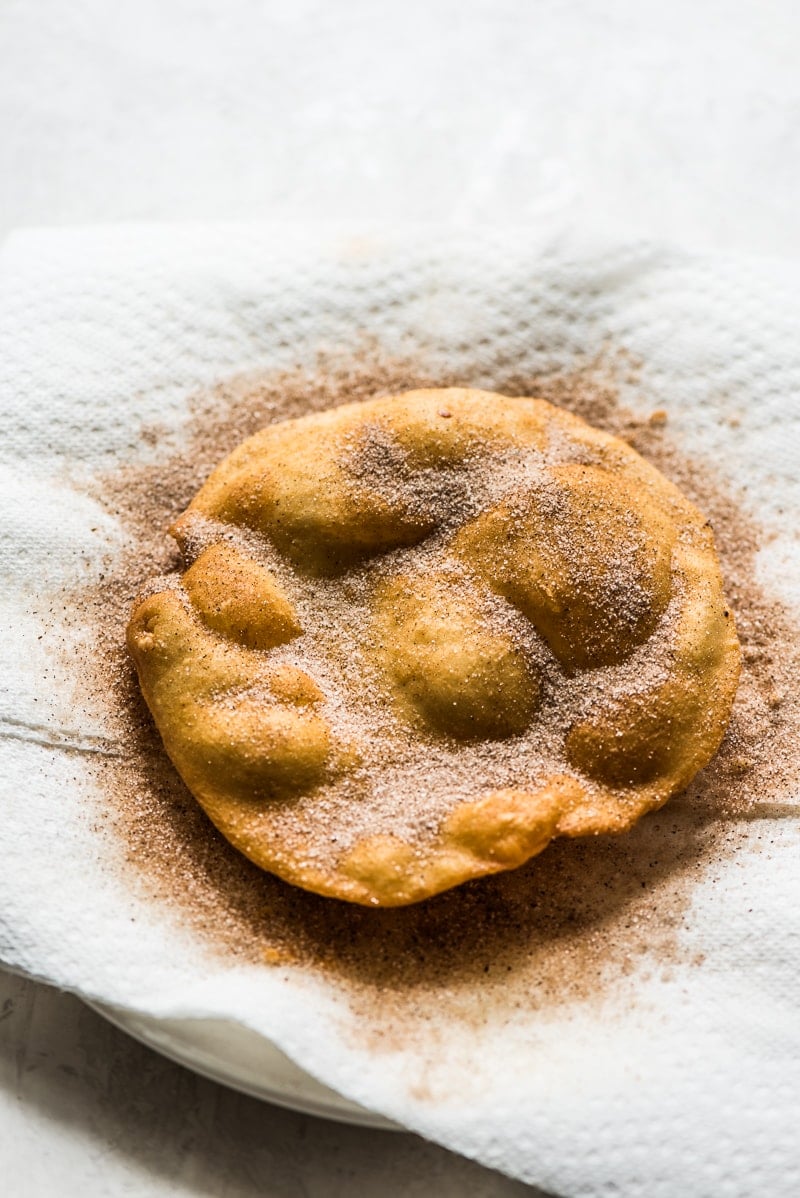 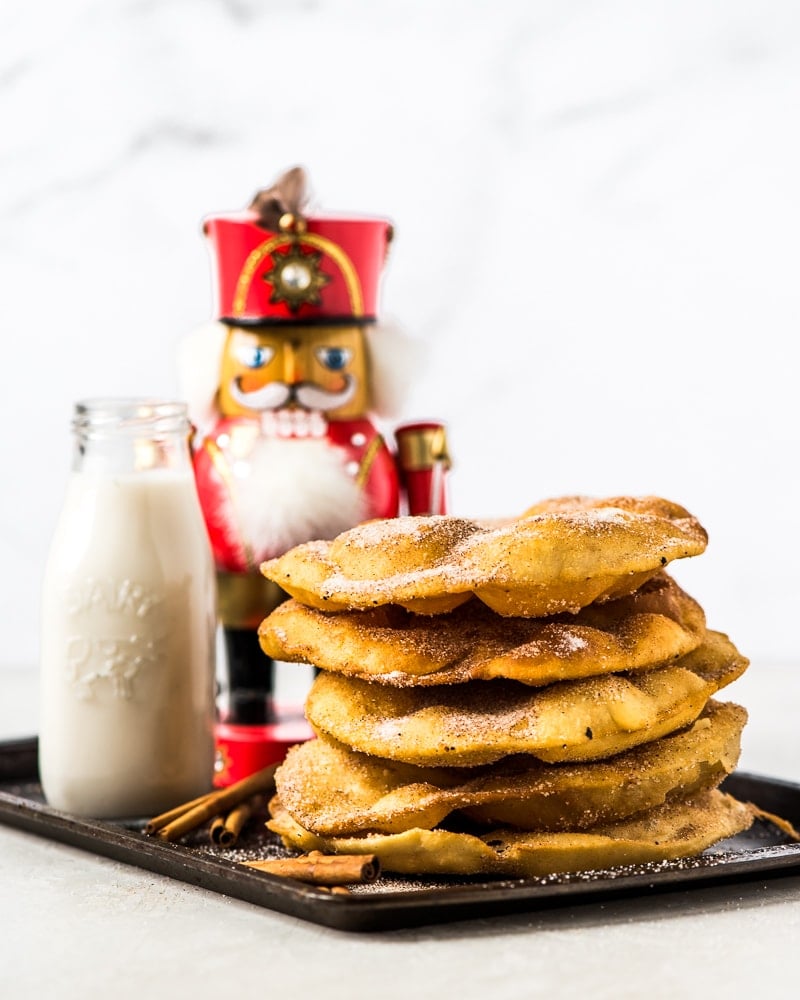 To store: I recommend stacking them on a plate and covering them with a simple paper towel or napkin on the counter for up to 3 days. If you cover them completely with a air tight cloche or place them in the fridge, they can lose some of their crunchy and crispy texture. They'll still taste good though!
Nutrition Facts
Mexican Bunuelos
Amount Per Serving (1 bunuelo with cinnamon sugar topping)
Calories 240 Calories from Fat 99
% Daily Value*
Fat 11g17%
Saturated Fat 1g5%
Trans Fat 0g
Polyunsaturated Fat 1g
Monounsaturated Fat 7g
Cholesterol 0mg0%
Sodium 158mg7%
Potassium 4mg0%
Carbohydrates 33g11%
Fiber 1g4%
Sugar 10g11%
Protein 3g6%
Vitamin A 0IU0%
Vitamin C 0mg0%
Calcium 10mg1%
Iron 0.2mg1%
* Percent Daily Values are based on a 2000 calorie diet.
Did you make this recipe?Leave a comment below and tag @isabeleats on social media!
« Easy Cranberry Margarita
12 Mexican Christmas Recipes to Make This Year »